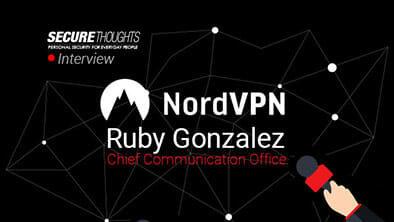 Interview with Ruby Gonzalez From NordVPN

Written by Fiona Marcus
Last updated on April 30, 2019 Views: 547 Comments: 1
While the ability to stream geo-blocked content is always a necessity (hello US Netflix!), privacy and security are becoming growing concerns for many people, not just in the US, but around the globe. As restrictions start getting tighter and countries pass laws demanding users’ browser information, citizens are looking to find solutions to maintain their privacy and security.

This is where NordVPN comes into play. One of the most recognized names in the VPN industry, this company strives to provide their customers with everything they need to surf safely, anonymously, and with the ability to access any website they choose, no matter restrictions or geo-blocks. Don’t take our word for it? Read our exclusive interview with NordVPN’s Chief Communications Officer, Ruby Gonzalez.

Tell us a little bit about yourself and how you got your start in the VPN industry? What is your title at NordVPN?

I stepped into the VPN industry more than a year ago by joining the NordVPN communication team as Chief Communication Officer. It is an honor and pleasure to work together with professionals who are truly dedicated to building advanced digital security solutions.

Can you introduce NordVPN a bit to our readers? How did NordVPN get started and how did it get where it is today?

NordVPN is one of the most trusted privacy and security service providers in the world, known for its strongly held values and well-thought-out security features. The idea to build a reliable VPN service emerged out of concern that the company’s founders had about the direction the Internet was heading, with increased monitoring, tracking and an ever-growing number of cyber threats.

Since 2012, NordVPN has grown into one of the world’s leading VPN providers, recognized by the most influential IT security specialists and used by over a million Internet users worldwide.

NordVPN is a well-known VPN service, what do you think contributed to its success?

Our technicians are constantly implementing various technological solutions to help Internet users avoid surveillance and protect their sensitive data from cybercriminals. At the same time, the NordVPN service helps reclaim freedom of speech in heavily censored countries and bring Internet access where it is limited due to firewalls, government restrictions or other reasons.

We are dedicated to fulfilling our promises and continuously working on improving our apps, developing new features, fixing bugs and expanding our global server network. I believe all this contributes to the overall success and helps to earn our users’ trust.

Using a VPN has a number of benefits, so customers choose NordVPN over other VPNs for different reasons. The fact that NordVPN is based in Panama, which has no mandatory data retention laws, definitely helps us to stand out from the crowd. Unlike many other VPN providers, we are not legally obliged to log and save any of our customers’ data. So if someone asks us, we have nothing to share.

The number of available servers and their locations is also significant because it has a direct impact on the service speed. NordVPN currently allows its users to choose from 2,426 servers in 56 countries and the list is growing continuously. Our unique security features, such as Double VPN, SmartPlay, and CyberSec, are also highly appreciated and used by our customers.

VPNs need to be a mix of performance and security – how does NordVPN achieve this?

We don’t believe that one must be sacrificed over the other. Speed and security aren’t contradictions, and we are continuously working to provide our customers with both. Our network is ever-expanding, but we also keep applying the latest security practices. We try to listen to our customers and optimize our performance without putting anyone at risk. This is one of our main goals, and we intend to keep it that way.

Our typical users are concerned about their privacy. They believe in their right to keep things to themselves and that no one should be able to interfere with their private activities, whether in their homes or on the Internet. And sure, they like to access censored or geo-restricted content when away from their homes.

There is a vast and ever-growing number of threats that might affect users. However, in my opinion, the greatest danger of all is the general lack of awareness and simple security practices. The damage done by ransomware, data or identity theft could be mitigated and its scale considerably reduced if we could just stick to a few good habits of cyber hygiene. At NordVPN, we’re not only providing our customers with easy-to-use security tools but also constantly publishing the best practices and tips on how to protect themselves online.

Even though the modern trend of sharing details about our personal lives has modified our perception of privacy, it is still extremely important to everyone, online and off. In a nutshell, we feel safe when we know nobody is watching or analyzing our actions. This is also closely related to person’s dignity.

What’s more, the right to privacy is also a crucial part of democracy and a number of liberties associated with it. People should be able to voice their opinions with no fear, and the Internet has been a very powerful tool for free speech. Unfortunately, the rapid rise of surveillance powers is changing that at an alarming pace.

What is NordVPN’s opinion of data retention?

It is a potential threat to one’s privacy. Moreover, the data retention we see right now has either not been proved to work or actually shown to be ineffective. Therefore, we naturally question the use of data retention.

In February 2015, a Dutch government agency found that data retention in the Netherlands had not been necessary. A German parliament study has concluded that data retention in Germany had only helped to increase the crime clearance rate by 0.006%. The Danish police, who have a much wider metadata and content data retention scheme, said the sheer amount of information they had was inconvenient and too complicated to use. Barack Obama’s NSA review panel found that mass surveillance by the NSA had not been necessary to stop any terrorist attacks in the United States.

China recently banned VPNs and streaming sites like Netflix and Hulu work diligently to block VPN access – how does NordVPN handle these kinds of opponents?

We’re doing everything in our power to provide Internet access with no restrictions, no matter where the person is located. Even though it sometimes feels like a cat-and-mouse game, we are not going to stop serving our customers’ needs. As far as we know, there will always be a way to deal with such issues, especially when technology is developing with each day.

Even though customers turn to VPN services for different reasons, I see two main causes of increased VPN usage in the US:

1. Political reasons: In 2017 ISPs were allowed to sell user data to third parties and net neutrality was repealed. We heard a lot of controversial stories regarding data retention, government tracking, and privacy. All these things have definitely made a push towards the increased interest in VPN services.

2. Security concerns: Major ransomware attacks, biggest personal data leaks in the Internet history and the accelerated cyber crime rate have led to the increased concern in peoples’ Internet security. VPN is a tool that protects a person from multiple different threats, which is why the VPN market in the US started to grow rapidly in last few years.

Where do you see VPN use going over the next few years?

Cyber attacks seem to be getting increasingly dangerous, and the Internet freedom has been on a decline for some time now. The year 2017 has witnessed some of the worst security breaches in history, and we believe that attacks will only keep getting worse. In the US, ISPs have the right to sell customers’ data to third parties, and net neutrality has just been repealed. The rest of the world is also passing freedom-limiting laws. Demand for VPN services has been growing steadily over the years, and it is likely to stay this way.

We are planning to continue our shift towards better cybersecurity. In the future, NordVPN will morph into a full-scale security solution that will protect Internet users against viruses, malware, DDoS attacks, and other online threats.

Of course, we won’t stop keeping our focus on improving the existing features. We will keep adding new servers and locations to our list, improving our customer support, and working on the simplicity of our apps.

Lastly, tell our readers what are the three main reasons why users should use a VPN?

1. Avoid monitoring and surveillance. With the level of the Internet surveillance rising, VPN is one of the most reliable methods to keep your information private.

2. Protect yourself from cybercrime. VPN hides your IP and encrypts your traffic. This is especially important on unsecured public networks, where hackers might be lurking for your personal data.

< Previous Best Free VPN Services
Next > VPN vs Smart DNS: Which is the Best for Online Privacy?

Interesting that they will try to morph into a full scale security solution in the future.