Update: I missed pointing out the cutting edge research done by Robert Auger in this area back in 2006. [1,2]. Also, Michal Zalewski has written about the RSS and ATOM vulnerabilities in the comprehensive Browser Security Handbook. Definitely check these links out.

Back in 2006, there was interesting research done by James Holderness[1] and James M. Snell[2] which uncovered a variety of XSS issues in various online feed aggregator services (e.g. Feed Demon). The vulnerability arises from the fact that it is not expected of RSS readers to render scripted content. I want to extend that research by doing threat analysis on inbuilt feed readers offered in most modern browsers. I have found Google Chrome (v2,3) and Opera (v9,v10) to be vulnerable, while Internet Explorer(v7,8), Firefox 3.5 and Safari 4 are resilient to the exploits mentioned below.

Attacker social engineers a victim user to visit a rss/atom feed link pointing to his or her evil site.

Modifies into a phishing page and asks user credentials for subscribing to Google Reader / My.Opera.com

Either
The trusted web site lets the attacker inject JavaScript content into any section of the site’s RSS or an Atom feed.

Victim’s cookies and other sensitive data gets sent to attacker’s site.

Note: For Internet Explorer (v7,8), the task is easier because it does automatic mime type detection. So, you can execute javascript content in any file extension. However, for other browsers, Firefox 3.5, Safari 4, Opera 10 and Chrome 3, they don’t support this functionality (perhaps for security reasons). So, using such extensions mentioned above can be used as a workaround for script execution in Opera and Chrome browsers.

Similar to Scenario 1, but exploit can be used for complete control over feeds in the Opera browser.

Include all in Scenario 1 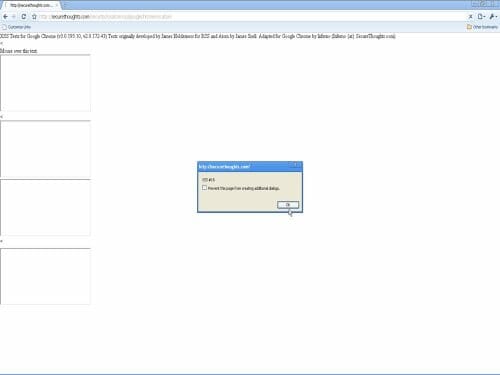 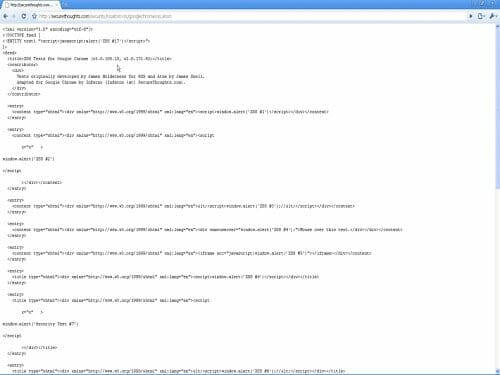 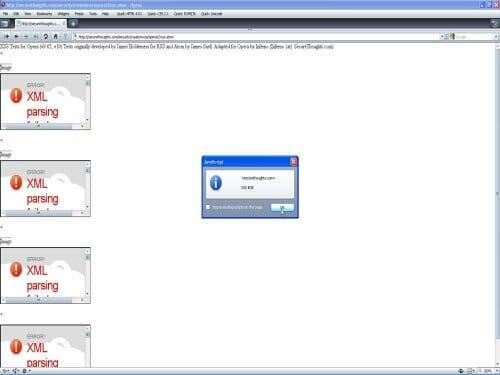 Opera After Fix –
Still the same. Only Scenario (3) will be fixed.

Chrome: Upgrade to latest version of Google Chrome (v3.0.195.21 or higher). If you remain connected to the internet, this should be automatic.
Opera: Wait for upcoming patch for Scenario (3) in next minor release (non-alpha/beta) of Opera 10 [Opera 9 users need to upgrade]. However, you will still continue to be vulnerable to script execution.

This vulnerability is discovered by
Inferno (inferno {at} securethoughts {dot} com)

I would like to thank Chris Evans from Google Chrome Security Team and Sigbjørn Vik from Opera Security Teamfor their prompt responses, engaging in insightful discussions and getting the fix ready in a timely manner. It was a pleasure working with them.